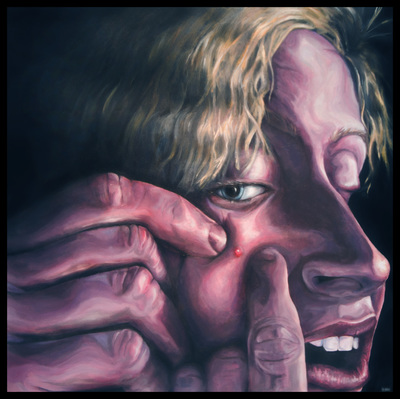 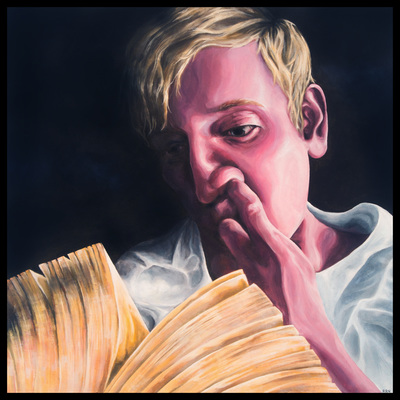 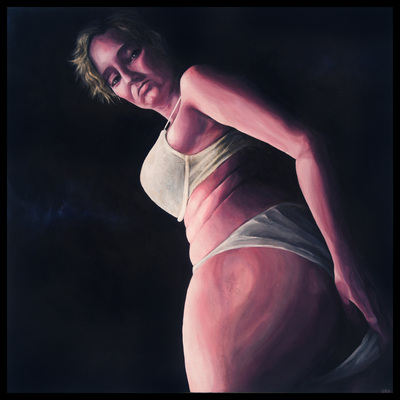 The real reason why I painted this:
It was hilarious to paint myself being gross on 3'x3' canvases.

The obnoxious pomobabble / academic newspeak that I used to justify doing it 🤣😭🤮:
In this body of work, I challenge historical conventions regarding the depiction of women in portraiture, particularly in self portraiture, by constructing a series of self portraits in which I portray myself engaging in acts generally regarded as inappropriate, improper, and/or distasteful. While all of my actions in these works are considered “normal” and “human”, they are also activities that people – especially women – are discouraged from acknowledging that they (we!) too engage in on a daily basis. In addition to confronting the relationships between gender and these types of behaviors, my work challenges common notions of propriety in regard to public and private spaces. Picking one's nose, popping zits, and plucking wedgies are all minor actions that fulfill specific physical needs and/or impulses, but are often regarded as inappropriate in public settings. My work explores the tension between the highly-constructed display of identity in portraiture and the uncontrived, candid ways in which we act when our comportment and appearance are not under scrutiny. Through creating large paintings and displaying them in a museum context, I aim to contest widely-accepted ideologies that police gender and sex in relation to propriety in public spaces. By situating myself as both subject and object, I also intend to complicate traditional (gendered) relationships between painter and painted and to challenge conventional, objectifying, and essentializing ways in which (mostly male) artists have represented (female) subjects in some of the “greatest” pieces in widely accepted versions of the Western art historical canon.